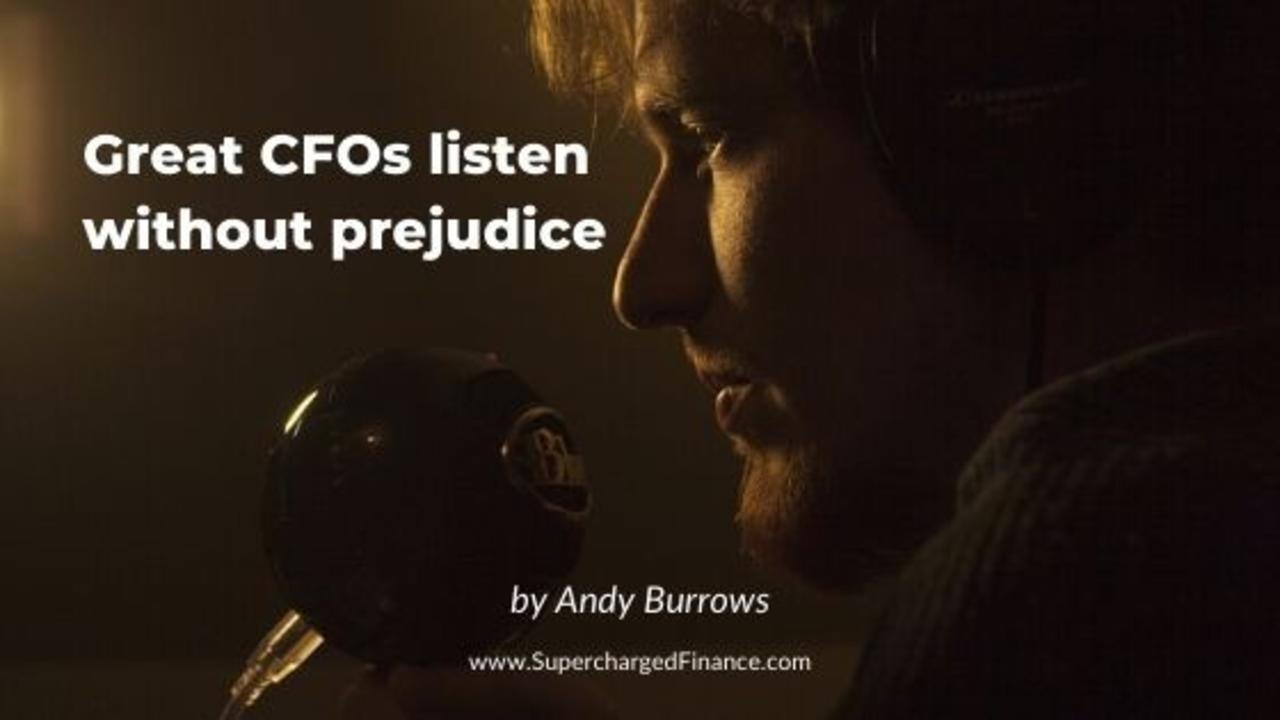 Communication skills, from lots of viewpoints, are not only something that CFOs benefit from. They’re skills for life, and skills for leadership.

That’s the same with any of the “personal effectiveness” skills I’ve written about in my previous few articles. I’ve directed them towards Finance business partners and CFOs, because those are the people who I hang around with most, professionally.

But, in reality, when we talk about “gravitas” or “maturity”, or even “credibility” or “presence” – i.e. the kinds of things that make people listen to you and take you seriously as an adult, rather than a young upstart, all seem to come back to some version of the few things I’m describing as “personal effectiveness”.

So, let’s have a think about communication skills.

And let’s narrow it down further. There are four types of communication: reading, writing, speaking and listening.

Reading, writing and speaking are abilities and skills that we take for granted in adults, after being taught in school throughout childhood and youth.

And yet, by contrast, listening is something we don’t really consider. We kind of just assume that it happens scientifically – sound waves go into our ears and someone’s speech registers in our brain!

So, let’s talk about the neglected skill of listening...

The neglected skill of listening

Penny Ferguson, in her book Transform Your Life, refers to a magazine article that was discussing the space shuttle accidents (Columbia and Challenger). It pointed out that both accidents should never have happened because there were people in the organisation that realised what the problems were. “However, nobody was listening to them.”

And, I must admit, one of the things I hate the most is being interrupted or talked over (followed closely by being ignored!). But it happens a lot, both at home and at work. It irritates me when people assume they know what I’m going to say before I’ve completed a sentence, and they either butt in with their own point or their own counterargument (sometimes without me needing to even utter the first word!).

Sometimes I get so fed up of interruptions that I just shut up and wait, and then if I still don’t get a chance to get a word in, I mentally disengage. I’m one of those annoying people who leaves a meeting at work silently looking fed up, and then sends an email an hour later. Interruptions can lead to some real dysfunctional behaviour!

Penny Ferguson used to do an exercise with her clients, pairing people up, and asking the listeners to remain silent for 3 minutes (she used a 3-minute hourglass “egg timer”) while the other person got to describe how they felt about a topic. They’d then keep swapping round until each person felt that the other person understood all that they wanted to say.

But, simply giving people airtime is not all there is to listening, although it’s a massive start.

Bad listening shows in the way we respond

There are a couple of ways that our response shows we’re not really listening properly.

One way is that we, in Stephen Covey’s words, read our autobiography into what someone else says. In other words, we are continually looking for ways to compare our situation with theirs. We’ll respond with something like, “oh yeah, that’s like when I ....”

You think that you’re finding common ground. But in reality, you’re twisting their words to fit your own experience so that you can get them to do what you did.

Another way we don’t listen properly is when we decide our response before fully understanding what the other person has to say, even if we wait for them to finish talking. We assume we know what they mean or where their argument is going, and we try to head them off and shortcut the discussion. We prescribe a solution before we’ve properly diagnosed the problem!

Too much of that will annoy the other person, as you consistently miss their point.

We should listen in order to understand

Stephen Covey, in The 7 Habits of Highly Effective People, says that often we listen to other people in order to respond, rather than listening to understand. But we should, “seek first to understand, then to be understood”.

I found this really challenging when I first came across it. I observed the way that I thought during conversations. And I was shocked. Most of the time the other person was talking, I was thinking of how to respond. What advice could I give? What examples could I use from my own experience to affirm what they were saying? What was my opinion of what they were saying? I had to be ready to say something in response!

The consequence was that I wasn’t really deeply understanding the people I was talking to. And that led to conversations that were superficial, inconclusive or simply dissatisfying.

What we need to do is to really listen to the other person.

How to listen to really understand

Well, here are a few tips taken from Covey’s classic book, which can divert us from the need to respond. These are levels we can use in our replies which simply focus on understanding what the other person is trying to communicate. These replies seem really basic, but what they’re designed to do is to help us to avoid coming back with our own ideas.

The aim is simply to understand, really understand.

All you’re aiming to do is to show that you’re paying attention to what they’re saying.

At the second level, you rephrase the content. So, if someone says, “I don’t like Boris Johnson,” you could say, “you’d prefer it if Boris Johnson was not Prime Minister in the UK.”

This is a little bit better, as it shows you are thinking about what they mean by their initial statement. The thing about this level, though, is that it’s quite “left-brained” factual.

Slightly better again, then, at a third level, is reflecting the feeling in their statement. So, you might reply, “you’re fed up.”

The final level is both rephrasing the content and reflecting the feeling. So, a reply could be, “you’re fed up of the UK government.”

The reason this level is best is because it enables the other person then to develop both their thoughts and feelings about what they’re thinking about. And you haven’t asked questions, probed, evaluated their opinions or made any judgment about what they’ve said.

The great things about really listening

In Stephen Covey’s words, it’s like giving the other person, “psychological air”. You’re carrying the conversation along in a way that simply gives the other person chance to develop their thinking and feelings, and gives you the chance to listen more deeply and understand.

The fundamental advantage of this kind of listening is that it strengthens your relationship with whoever you’re talking with, because they see you as someone who wants to know them and not just work with them or live with them.

I remember being told this about networking. Someone told me that rather than going into a networking event with a prepared “elevator pitch”, I should just go prepared to learn about the people I talked to. The irony is that when you make the effort to just listen to people, those people go away feeling good about the conversation they’ve had with you, and see you as a really good person to talk to. In marketing and networking terms, it makes them want to come back to talk to you again!

More than that, though, it allows you to have a proper conversation where you respond to what the other person is actually saying. And it creates the goodwill where they’ll listen to what you have to say.

Sometimes, they may even answer their own questions and solve their own problems in just talking. And that helps them grow and transform at the same time. It also has been known to negate the need for pitching and plugging or “selling”. They may say, “I just want to work with someone who understands me.”

And so, you can see how this can be applied to working as a CFO or more generally as a Finance business partner.

As a Finance professional, we have experience, skills and knowledge that can help the business manage its performance so as to perform better. In other words, we have what the business needs to drive performance.

Therefore, in Finance we must be fundamentally good listeners.

In the next article, we'll cover the essential mindset needed in dealing with other people in the business.

I've put all the articles from this series into a book which you can buy on Amazon... but you can also get the pdf download version of the book free by clicking the link below:

An introduction to personal effectiveness for CFOs and Finance professionals

The Short Guide to How Finance Can Drive Business Performance